Background: Anterior cruciate ligament (ACL) tear is the most common serious ligamentous injury to the knee joint. This paper presents the assessment of clinical outcome of semitendinosus and gracilis tendons auto-grafts for arthroscopic anatomical reconstruction of ACL injuries.
Aims & Objectives: To know the functional outcome of arthroscopic anatomical anterior cruciate ligament reconstruction using quadrupled hamstring (semitendinosus and gracilis) auto graft using Lysholm knee score.
Material & Method: Thirty male patients, aged between 20-50 years were treated from 1st Oct 2013 till 31st Mar 2015 for ACL tear of more than 6-weeks post-trauma, which was confirmed by Lachman test and/or anterior drawer test and/or classic pivot shift maneuver of MacIntosh and Galway. The anterior cruciate ligament was reconstructed with a single-incision, arthroscopic assisted techniques. The hamstring tendons were harvested through a small oblique antero-medial incision over the pes-anserinus insertion. The graft was then prepared for a quadrupled semitendinosus gracilis graft using no-5 ethibond and Endo-CL loop and was presoaked in gentamycin. The portals used for arthroscopy included the high infero-lateral for arthroscope and Infero-medial for instruments. In some patients the quadrupled hamstring graft was fixed with interference screws on tibial side and in some patients the graft was fixed with titanium suture disc depending upon the length of the graft, along with Endo-CL button used on femoral side.
Result: All the patients were evaluated periodically at pre op, 4 months, 5 months and 6 months. The standard protocol of Lysholm and Guillquist knee scoring system were used for subjective evaluation of the results of the surgery during follow up. All cases gave good to excellent post-operative result.
Conclusion: Autologous ipsilateral quadrupled hamstring graft produces good to excellent post operative functional scores which are clinically significant. Quadrupled Hamstring (Semitendinosus and gracilis) tendons auto graft should be preferred over Bone-Tendon-Bone graft as it has more tensile strength and less morbidity at donor site.
Keywords: ACL, Arthroscopy, Graft, Knee.

Anterior cruciate ligament (ACL) tear is the most common serious ligamentous Injury to the knee joint [1,2]. The ACL is the primary stabilizer against anterior translation of the tibia on the femur3 and is important in counteracting rotation and valgus stress as well. Anterior cruciate ligament deficiency leads to knee instability. This results in recurrent injuries and increased risk of intra-articular damage, especially the meniscus4. The goals of the ACL reconstruction are to restore stability to the knee; allow the patient to return to normal activities, including sports, and to delay the onset of osteoarthritis with associated recurrent injuries to the articular cartilage and loss of menisci functions [5,6,7].

During the past decade arthroscopically assisted techniques have been an accepted method of reconstructing the ACL[7,8,9]. There is little or no difference between bone-patellar tendon-bone and combined semitendinosus and gracilis hamstring tendon grafts in terms of the functional outcome after ACL reconstruction, despite greater laxity measurements in the hamstring tendon group patients[10]. This suggests that operating surgeon must decide how to select the appropriate graft for an individual patient [11]. Graft choice, Surgeon experience, correct graft position, choice the graft fixation, and postoperative rehabilitation confound the results of comparison of ACL reconstruction [12]. Stiffness and strength tend to be slightly better with bone-patellar tendon-bone, but overall results are comparable [13].
The advantages of arthroscopically assisted anterior cruciate ligament reconstruction include elimination of capsular incisions, decrease in trauma to the fat pad, avoidance of desiccation of the articular cartilage, better visualization of the femoral attachment, and a lower incidence of post-operative patello-femoral pain than with open reconstruction [14]. The primary disadvantage of arthroscopically assisted technique is that the technique has a long learning curve and is a technically demanding procedure [15].
The bone-patellar tendon-bone and the hamstring tendon are the two most commonly used autografts for reconstruction [16-20]. The bone-patellar tendon-bone graft has been widely accepted as gold standard for ACL reconstruction with high success rate [21-23]. However Arthroscopic reconstruction of anterior cruciate ligament with Bone-Tendon-Bone graft is associated with donor site morbidity like bone defects, compromises function of extensor apparatus, anterior knee pain and kneeling problems [24]
Currently, Quadrupled Hamstring (Semitendinosus and gracilis) tendons auto graft is preferred over Bone-Tendon-Bone graft as it has more tensile strength and less morbidity at donor site. Also anatomical reconstruction i.e transportal technique offers better rotational control which is lacking in traditional transtibial techniques.
Hence in this study, author is making an effort to assess the clinical outcome of semitendinosus and gracilis tendons autografts for arthroscopic anatomical reconstruction of ACL injuries.

In the present study, a total number of 30 patients underwent anterior cruciate ligament reconstruction. Out of this, all 30 patients were male. All the patients were kept on postoperative ACL rehabilitation protocol. Outcome was measured using Lysholm knee score (Table 1), Anterior drawer test, Lachman test, Pivot shift test, Range of motion of the knee joint and Quadriceps power of ipsilateral knee.

Surgical Technique: All patients were operated on under spinal or combined spinal-epidural anaesthesia. Per-operative prophylactic antibiotic cover was given with third generation cephalosporin parenterally. Patient was given supine position, a pneumatic tourniquet was used, and the operated leg was draped free with knee in 90 degrees of flexion (Fig.1a). A diagnostic arthroscopy was performed. The anterior cruciate ligament was reconstructed with a single-incision, arthroscopic assisted techniques. The hamstring tendons were harvested through a small oblique antero-medial incision over the pes-anserinus insertion (Fig.1b). The graft was then prepared for a quadrupled semitendinosus gracilis graft using no-5 ethibond and Endo-CL loop and was presoaked in gentamycin (Fig.1c).
The portals used for arthroscopy included the high infero-lateral for arthroscope and Infero-medial for instruments (Fig.1d). The femoral tunnel was prepared by passing a guide wire through far medial portal into the femoral footprint of ACL using 7mm offset femoral tunnel aimer (Fig.1e). Size of the graft was measured, usually we have used 8-9mm grafts, reaming done accordingly so as to create around 15-20mm tunnel for the graft and the Endo-CL loop to pass. No-1 nylone thread loop was passed over guide wire in a fashion that the loop remains at the medial portal and the free ends were passed through the tunnel so as to exit on the posterio-lateral aspect of the femur.
Tibial jig was used at 50-55 degrees angle, according to the available graft length. Tibial tunnel was prepared so that it should exit intra-articularly at tibial footprint of ACL. Reaming was done over a guide wire according to the diameter of the graft. Then through this tibial tunnel the previously passed nylone suture loop was retrieved back. Now this nylone loop acts as a guide for the passage of the graft (Fig.1f). Using this nylone loop the graft was rail roaded till the Endo-CL button exists the lateral femoral cortex which was then toggled with the aim of seating it horizontally at the femoral tunnel exit.
Around 15-20 times flexion-extension cycling done (Fig.1g), so as to remove any residual slack in the graft. The fixation method for grafts was either a cannulated interference screw or a suture disc as per the situation in 30 degrees of knee flexion (Fig.1h). 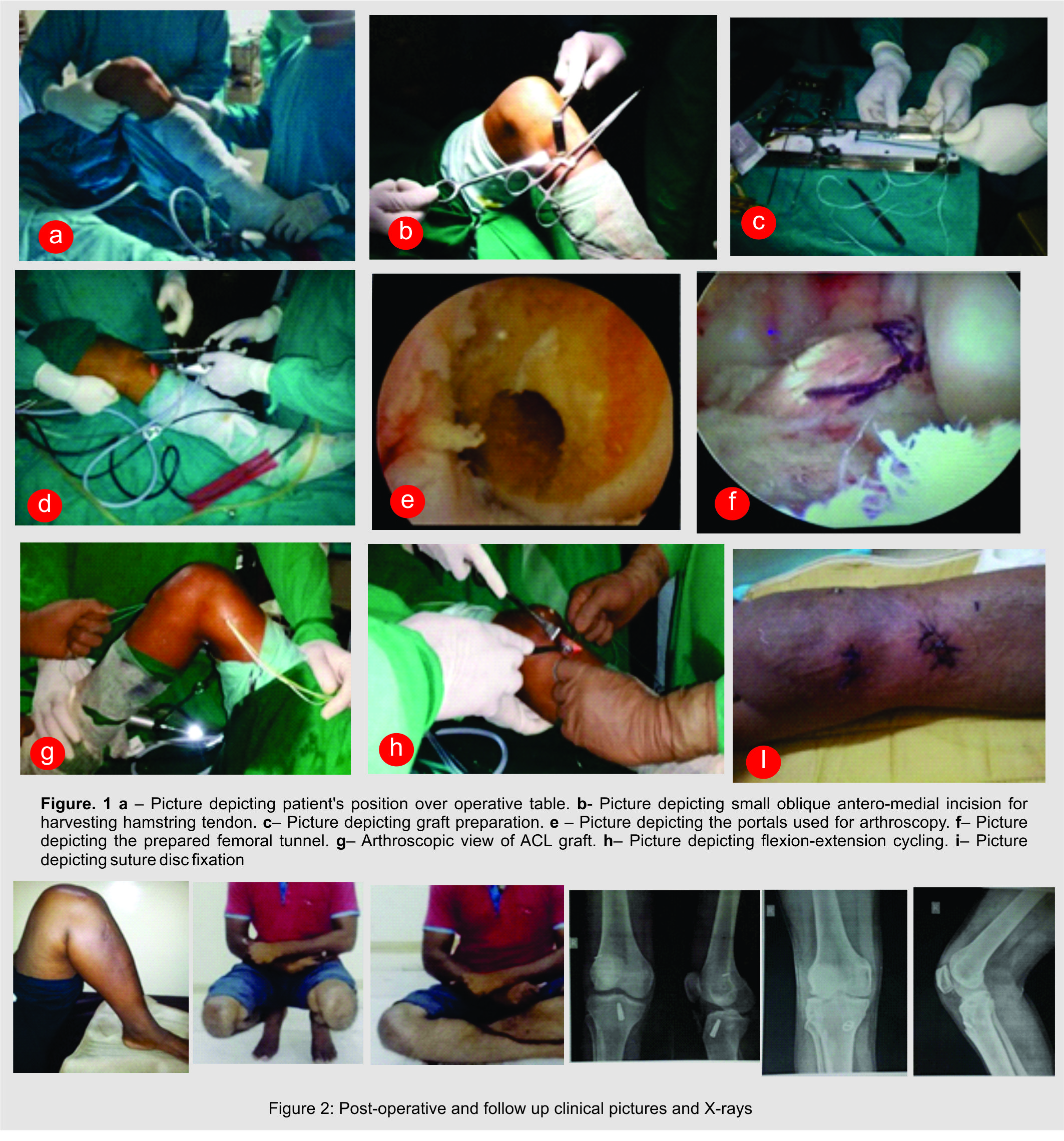 Over the past few years, there has been increasing interest in the use semitendinosus – gracilis tendons for ACL reconstruction because of the comparatively low post-operative morbidity.
In the present study no patient had Pivot Shift Test positive, post-operatively. Similar were the results published by Mahir et al which was also a transportal technique which clearly indicates that this technique is having a better rotational control than the previous transtibial techniques (Table 3).
The rehabilitation of the patients who underwent arthroscopic anatomical ACL reconstructions with ST-G was easier and faster in comparison with that following the surgical interventions performed with BTB graft during the previous years.[25]
Chaudhary D & Co-workers reconstructed anterior cruciate ligament with Bone- Patellar Tendon- Bone autograft in 100 cases and concluded anterior knee pain is the most common complication followed by difficulty in regaining full range of motion.[26]
Leo Chan & Co-workers reconstructed ACL by quadrupled semitendinosus auto graft using endobutton technique for femoral fixation and found little morbidity and low reoperative rate and excellent clinical results.[27]
D Choudhary et al. 2005 had not reported any graft failure or deep infection but reported of posterior blow out of femur which was managed with femoral bone plug with cortical screw, they reported most common complication as anterior knee pain and most common immediate complication as screw divergence.
In our study there were no reports of posterior blow out of femur due to the use of femoral offset guide.

Over the past few years, there has been increasing interest in the use semitendinosus – gracilis tendons for ACL reconstruction because of the comparatively low post-operative morbidity.
Patients with isolated ACL injury had better outcome compared to patients who underwent associated meniscectomy. There is highly significant pre operative to post operative improvement in knee functional scores of Lysholm.
Quadrupled Hamstring (Semitendinosus and gracilis) tendons auto graft should be preferred over Bone-Tendon-Bone graft as it has more tensile strength and less morbidity at donor site.
Autologous ipsilateral quadrupled hamstring graft have produced good to excellent post operative functional scores which were clinically significant.