Introduction: Lower limb length discrepancy commonly occurs due to shortening of tibia or femur alone or shortening in both the bones. Congenital Proximal focal femoral deficiency (CPFFD) is one of the commonest causes of femoral shortening followed by post infective arthritis of hip leading to shortening of femur. Femoral lengthening in children needs to be done meticulously after proper planning.
Material and methods: This retrospective study was done on 14 patients taking treatment between 2009 and 2015 at a tertiary care hospital for femoral shortening, to study the effects of femoral lengthening on Hip. The cases were studied on the basis of their treatment records, clinical and radiological examination findings and personal interview.
Observations and results: The two common causes of femoral shortening were CPFFD in 64% and post infective arthritis of hip in 28.5%. Left femur shortening was seen in 9 cases. The total lengthening achieved was 62cm, the average being 4.4cm. Length equalization was achieved in 3 cases, while 2 cases had significant shortening due to fracture of regenerate. One patient developed hip dislocation followed by knee dislocation after 8cm. of femur lengthening. One case each developed hip and knee dislocation after 6 cm. of femur lengthening. All the patients had mild to moderate knee stiffness.
Conclusion: Femur lengthening more than 6 cm. may lead to hip dislocation, hence be avoided or done very slowly with repeated clinico radiological examination of hips.
Key Words: Femoral lengthening; hip; proximal focal femoral deficiency.

Limb length discrepancy is a common orthopedic problem arising from either shortening or overgrowth of one or more bones in the limb. Lower limb length discrepancy leads to difficulty in weight bearing and ambulation. Limb length correction or limb lengthening procedures require preoperative planning, surgical skills, proper execution, follow up and meticulous rehabilitation. Treatment of limb length discrepancy depends on its etiology, bones involved and amount of discrepancy. Causes of femur shortening are Proximal femoral focal deficiencies (PFFD), post traumatic loss of bone, post infective growth disturbance or loss of bone due to sequestration. Bowen ET al [1] emphasized the need of avoiding hip subluxation and dislocation during femoral lengthening in patients with unilateral femoral shortening. During prolonged treatment period joint deformities and muscle contractures may develop. Hence limb lengthening procedure should not be taken lightly.
Complications related to ankle and knee joint deformities and contractures have been studied widely. Effects of femur lengthening on hip have not been studied much. In cases of femur lengthening arches are applied in the proximal thigh near greater trochanter. Multiple Schnaz pins/ tensioned wires are passed across the muscles and bones at various levels. The lengthening process may last for 6-12 months. The distractive forces applied at corticotomy site may also lead to abnormal stresses at hip joint bones and muscles leading to changes in the joint anatomy and function.
Gradual distraction techniques are more reliable alternative for isolated limb length discrepancy correction. These are being used since 1921 [2]. Ilizarov [3, 4] devised and popularized his Distraction Osteogenesis technique and principle very effectively and used it for various indications in many bones. The present study aims to find out the effects of femoral lengthening on hip joint function and anatomy.

This retrospective study was done during the period of July 2015 to April 2016 on cases that were undergoing femur lengthening or had completed the treatment at the tertiary care hospital attached to a medical college.
A total of 11 patients’ records could be obtained from medical record section of the hospital. Details of three patients from two other orthopedic hospitals were also obtained, thus making the sample size 14. All these patients had taken treatment from 2009 to 2015. All the important details of the patients were noted down from the case records. The patients were then called for clinicoradiological examination by telephonic communication and were motivated by social workers operating in their area for physical follow up. The responding patients were subjected to detailed history taking along with surgery details and details of limb length discrepancy prior to and at the end of treatment. They were clinically examined with emphasis to function of hip and knee and limb length discrepancy, total and in femur and tibia separately. X ray examination of pelvis with both hips and the affected side thigh was done in all cases.
Non reporting patients’ details were taken by telephonic interview. All the information was tabulated and analyzed in respect of age, sex, etiology, type of treatment, length gained in femur, hip function, complications and x ray abnormality. 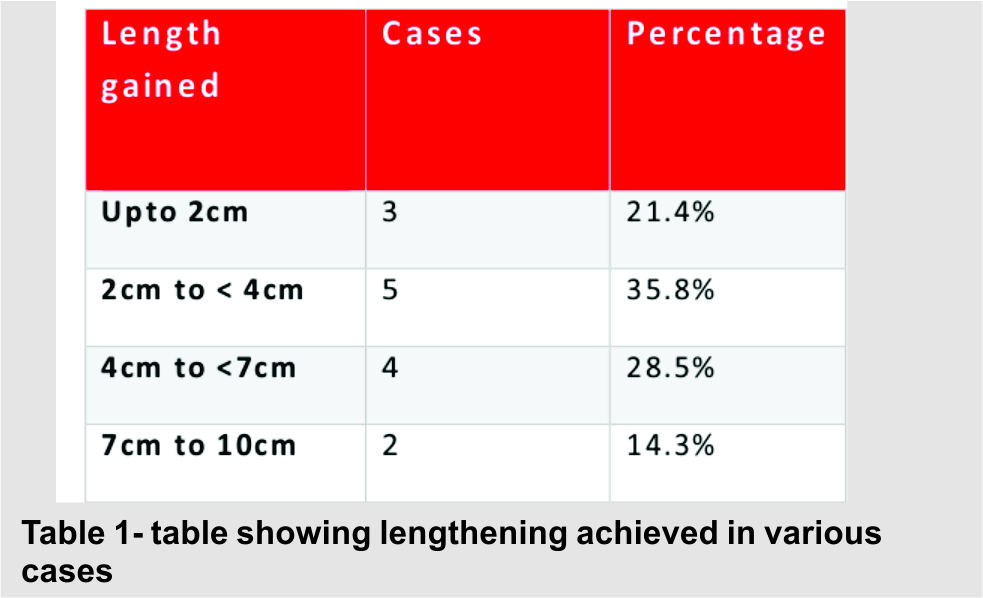 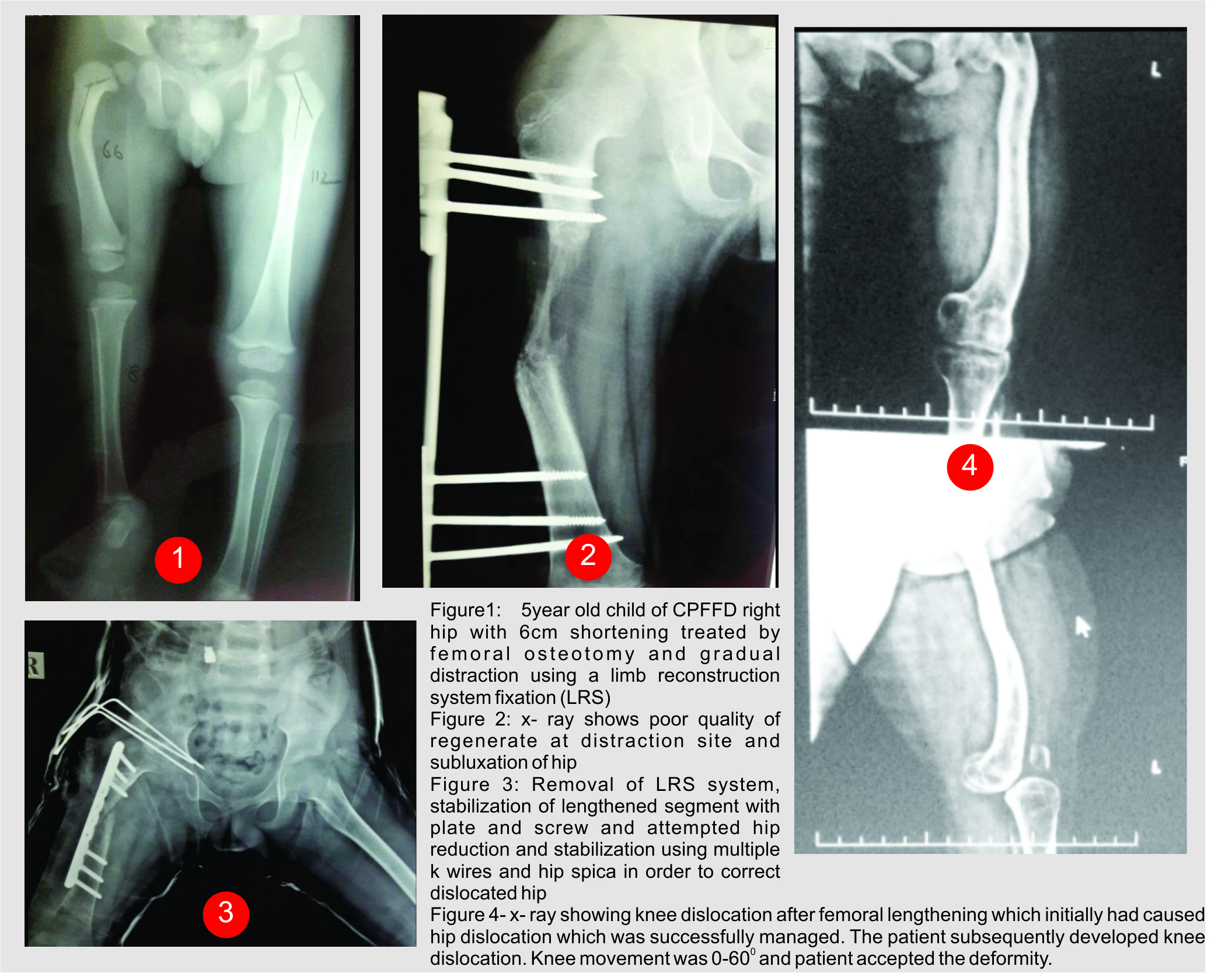